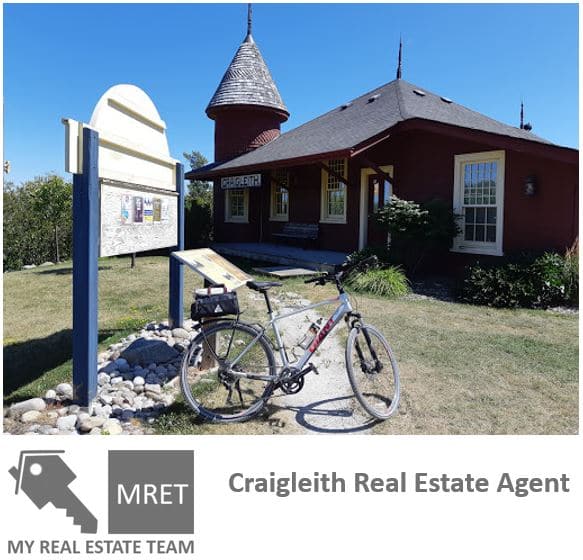 Craigleith is a small enclave of homes along the shore of Georgian Bay. Craigleith Railway Station is now a Museum marking the long history of the area. The train station brought people to the area from 1872-1984, in 1989 the railway line was replaced by the Georgian Trail which runs 34km from Collingwood to Meaford and in the spring by the Craigleith Railway station the trail is surrounded by a tunnel of millions of lilacs. Craigleith is also home to Craigleith Provincial Park right on the water, along with Northwinds Beach.

The homes in Craigleith are custom waterfront homes, and custom chalets nestled in the trees just a short walk to the lake and a quick drive to Blue Mountain Resort and the private ski clubs like Craigleith Ski Club, Alpine Ski Club & Osler Bluff Ski Club.

Sir Sandford Fleming, Canada’s famed railway engineer, is responsible for the Depot’s establishment. In 1854, he moved his parents, brothers, and sister to a plot of land once owned by John Brazier, the area’s first inhabitant. The Flemings named the region Craigleith, which means “rocky harbour” in Gaelic, and developed a quarry and a furniture business, as well as donating property for the Township’s first gravel road. In the 1600s, the route followed an ancient native trail used by local Petun indigenous people, Jesuit missionaries, and commerce.

Sandford’s father, Andrew G. Fleming, sold a plot of land along the same route to the Northern Railway in 1872 with the purpose of erecting a station for the hamlet. By 1880, a lovely station with the most cutting-edge architectural design – a rounded tower – welcomed the whistle of the locomotive and the promise of prosperity for the city.

The tiny station became the focus of ski trains from Toronto in the early 1940s, and established the seeds for what would become Ontario’s top ski and four-season recreational destination: Blue Mountain Resort, in a path completely unexpected by the Flemings.

This restoration would not have been feasible without $329,000 in donations from the Craigleith Heritage Committee and the Blue Mountain Watershed Trust Foundation, which were gathered from over 250 members of the public and local business organisations. In addition to SuperBuild funding, the Craigleith Heritage Depot Restoration Project received $55,000 from the Trillium Foundation. A commemorative partnership plaque hangs on the wall behind the Depot’s reception desk, recognising these generous donors.
Throughout the year, Craigleith Heritage Depot presents a range of entertaining and instructive activities for people of all ages. Keep up with our upcoming events by following us on Twitter, Facebook, or Instagram. Visit the Blue Mountains Public Library and Craigleith Heritage Depot’s event calendar to learn about all of their upcoming programmes

A real estate agent is a certified professional who facilitates real estate transactions by matching buyers and sellers and representing them in discussions. Real estate agents are normally paid entirely by commission, a percentage of the property’s purchase price, so their income is contingent on their ability to conclude a transaction. A real estate agent must work for or be linked with a real estate broker (an individual or a brokerage firm) who is more experienced and licensed to a higher degree.

Real estate agents and realtors in Canada are licenced by each province rather than the federal government. A real estate “commission” oversees and licences real estate brokers and agents in each state. Some states, for example, only allow lawyers to generate real estate documentation, while others allow both lawyers and licenced real estate agents to do so. State laws govern the types of relationships that can exist between clients and real estate licensees, as well as real estate licensees’ legal obligations to represent clients and members of the public. Rules differ significantly from state to state as determined by law, for example, on what legal wording is required to transfer real property, agency connections, inspections, disclosures, continuing education, and other topics. In most areas in the United States, a person must hold a licence in order to engage in licenced activities, which are regulated by state statutes. The work done “for compensation” is the main component of the criteria for getting a licence to undertake certain activities. As a result, if a person wants to assist a friend in selling or buying a home without expecting any kind of payment in return, a licence is not required to complete all of the work. However, because most individuals expect to be paid for their efforts and talents, a licence would be required by law before someone could be paid for their services as a real estate broker or agent. Unlicensed behaviour is prohibited, and the province state real estate commission has the right to sanction anyone who operate as real estate licensees, however buyers and sellers who act as principals in the sale or purchase of real estate are typically exempt from licencing requirements. It’s worth noting that in some areas, lawyers who are not licenced as brokers or agents manage real estate sales for a fee. Even lawyers, however, can only engage in real estate businesses that are unrelated to their primary profession. It is impossible for a lawyer to become a seller’s selling agent if it is the only service requested by the client. If lawyers want to engage in licenced activities, they must first obtain a broker’s licence. Lawyers, on the other hand, are exempt from the mandatory schooling requirements