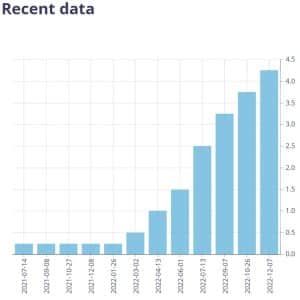 It is suspected that the Bank of Canada will raise interest rates by a final quarter point on Wednesday January 25, 2023, before stopping its long-running cycle of tightening monetary policy.

Officials from the central bank made it clear in December that they were getting close to the end of their fight against inflation, in which they raised borrowing costs seven times in a row last year. They said that new information would help them decide whether to keep raising rates or stop for now.

Since then, most signs about the economy have been better than expected. Even though prices are going up and borrowing costs are going up, unemployment is still close to a record low, and people are still spending money. The rate of inflation keeps going down. In December, it was 6.3 percent, down from 8.1 percent in June, when it was at its highest. But it is still well above the 2 percent goal set by the central bank.

The growth of the Canadian economy through the fourth quarter of 2022 makes it more likely that rates will go up again this week. However, for the first time in almost a year, it is not certain that rates will go up again. Most Bay Street analysts expect a quarter-point move, and the financial markets are pricing in a 70 percent chance that this will happen. The bank’s standard lending rate would then be 4.5 percent.

Josh Nye, a senior economist at Royal Bank of Canada, said, ” We’re looking for a 25-basis-point hike next Wednesday, but there’s two-way risks around that.” ” We could see them pause, or could even see another 50-basis-point hike. They’ve kind of left a lot of options on the table.” (One hundredth of a percentage point is one basis point.)

Most experts think that this is the last step in the current cycle of tightening. The Bank of Canada hasn’t gotten inflation under control yet. But changes in interest rates take a long time to influence inflation. Usually, it takes six to eight quarters for the full effect to be felt. In fact, most of the pain from the rate hikes in 2022 hasn’t been felt outside of the housing market yet.

In the next few months, this could change. Consumer spending is expected to go down as more homeowners renew their mortgages at higher rates and nervous shoppers cut back on non-essential purchases. Two surveys from the Bank of Canada that came out last week showed that most businesses and consumers think there will be a recession in the next 12 months. The central bank predicts that growth in the economy will be close to zero in the first half of 2023, when the economy will stall.

The bank is trying to slow down the economy by raising the cost of borrowing money. This is done to stop people from spending money on goods and services and to slow the rate at which prices are going up. But it is trying not to do too much, which is hard to do because it takes time for rate hikes to have the effect that the government wants.

In a speech in December, Bank of Canada Governor Tiff Macklem said, “We are trying to balance the risks of overtightening and undertightening monetary policy.”

“If we raise rates too much, we could drive the economy into an unnecessarily painful recession and undershoot the inflation target. If we don’t raise them enough, inflation will remain elevated, and households and business will come to expect persistently high inflation.”

He also said that the “greater risk” was to not do enough.

As they slow down the pace of tightening monetary policy and get close to a turning point, other central banks also have to find a balance. On Feb. 1, the U.S. Federal Reserve is likely to announce a rate increase of 25 basis points. This will bring the Federal Funds Rate up to a range of 4.5 percent to 4.75 percent.

In December, most Fed officials said that they think the policy rate will be higher than 5% by the end of 2023. But traders and investors are starting to doubt that the U.S. central bank will get to that point. The financial markets think that the end policy rate will be between 4.75 percent and 5 percent.

The strength of the job market makes it hard for the central bank to do its job. In December, Canada added 104,000 jobs, and the unemployment rate went down to 5%, which is just a little bit higher than the record low of 4.9% that was reached last summer.

Because there aren’t enough jobs, wages are going up. This is good news for Canadian workers, but it makes it harder for the central bank to control inflation because higher wages lead to higher prices, especially in the service sector. In a speech in November, Mr. Macklem said that to get inflation back to target, unemployment would have to go up and the number of open jobs would have to go down.

Statistics Canada released the latest data on the Consumer Price Index last week. This shows that inflation is moving in the right direction. The annual rate of CPI growth dropped from 6.8% in November to 6.3% in December. This was due to a big drop in gasoline prices. Core inflation measures, which show what’s really going on with prices in the economy, are still stubbornly high, but they are starting to slow down.

Economists think that prices will keep going down. In the next few months, the jump in energy and other commodity prices that happened in the spring of 2022 will no longer show up in the annual data. As supply chains get better and demand for non-essential goods goes down, prices for durable goods are already staying the same or even going down.

The central bank said in October that it expects CPI inflation to be around 3 percent by the end of 2023 and back to the 2 percent target by the end of 2024. On Wednesday, the bank will put out new predictions for inflation and growth in the economy.