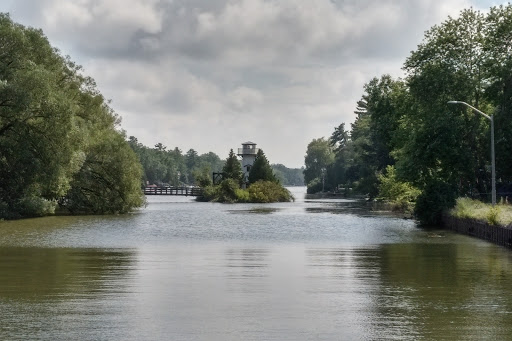 In 1789, the schooner Nancy was built in Detroit for the fur trade. She would supply required commodities such as blankets, meat, tools, bread, firearms, and ammunition to isolated outposts like Sault Ste. Marie and Fort Michilimackinac, as well as pick up furs to be taken back to civilization.

When the United States and Britain declared war in 1812, the schooner was requisitioned as British transport. The British Fleet was defeated in the Battle of Lake Erie on September 9, 1813, leaving the Nancy as the last British ship in the Great Lakes.
Three American schooners, the Niagara, Tigress, and Scorpion, landed near the mouth of the Nottawasaga River on August 14, 1814, intending to wait for the Nancy’s return from Fort Michilimackinac. The Americans discovered the Nancy buried a short further up the river while gathering wood on the beach. The Nancy caught fire, burned to the waterline, and sank as a result of the conflict.

The river accumulated silt around the sunken ship over time, creating a small island. The hull was raised and displayed on what is now known as Nancy Island in 1928. In 1967, a lighthouse was built on small Tower Island, which is reached by a footbridge from Nancy Island, as part of a Canadian centennial year project. The Collingwood Outer Range Front Lighthouse, which was built in 1894, provided the inspiration for this tower. Nancy Island was known as the Museum of the Upper Great Lakes at the time the replica lighthouse was created, and the lighthouse was used as part of a maritime theme. In the lantern room, visitors can climb the tower to see a fourth-order lens.
Renovations by Rick gave the lighthouse a facelift in 2008. Rick Deveaux and his crew worked just over a month rebuilding the windows, installing a new railing around the top of the tower, and coating it with cedar shingles. The $32,000 rehabilitation was financed by the Town of Wasaga Beach, and the Minister of Natural Resources cut the ribbon to reopen Nancy Island Lighthouse on Friday, October 3.

Collingwood’s lighthouse history dates back to the 1800s, when the Northern Railway of Canada installed a port light. The light was taken over by the Canadian government in 1877, and Robert Doherty was appointed keeper with a salary of $200 per year. This early lighthouse was a white wooden tower with a six-foot-diameter wooden lantern that was located on the breakwater. When Keeper Doherty died in 1881, the government named William Bishop to succeed him.

Tenders for the construction of a detached pier in Collingwood Harbour and a light to sit atop the pier were invited in 1883. The contract for the work was awarded to Robert Reed of Thornbury, and it was finished the following year. The lantern that was erected atop a mast with a shed at its base provided light to the small pier. The pier was at the most southwesterly point of the starboard side of the curved dredging channel of the harbour, and its red light was only supposed to be visible within the harbour’s boundaries.

Next Attraction in Wasaga Beach